Fire Walls – Protecting the Computer and your Paradise

Garden of Eden is often called ‘Paradise’. Paradise is derived from a Persian word and means ‘walled orchard garden’.  So the Paradise in the bible is defined by walls that keep out Chaos.  Perhaps said another way, Paradise is the protected heavenly and ordered garden that was created out of Chaos and with the wall keeping Chaos at bay.

In Genesis, the Garden of Eden is created by God for us.  It is walled to define and separate the chaos of the outside and unknown from the paradise within. In many subsequent bible stories, the walled city is common, an extension of the walled house.  Further, in Adam and Eve’s initial fall from grace, they realise they are naked and needing protection and immediately don clothing.

Historically, as Mankind grew, we gathered and found we needed these barriers – around our homes, cities, Walls not only provided physical protection, but also facilitate communication and commerce.  The trust level for those within the outer most city wall is higher than those unknown tribes outside the barrier.  The trust within the family compound would be higher than those others in the city – ie outside the family compound.  Trade at higher trust levels is far easier – larger amounts can be traded more efficiently, with less communication.

Walls that began as physical grew into other forms. These ‘walls’ could be tribe based, skill based like guilds etc.  What is clear is that these ‘walls’ that separate – protected and unprotected, trusted and not-trusted, Order and Chaos and ultimately good and malevolence – were an integral and fundamental part of our complex and growing society.

In the beginning we had computers and that alone was an amazing feat.
The first computers had no protection or ‘walls’ from other computers. There was only rudimentary security early on – login/passwords. Physical security was at first the only security – Valuable computers were in locked ‘walled’ rooms.

Connecting the computers to other computers was the next step.  Although crude and at a laughable slow rate, the fact they could communicate together was significant  in itself – no one had even thought there could be bad or malevolent communication. (Accidental errors/mistakes were anticipated.  Malicious effort crafted to caused harm was to the computer was not anticipated).

As more computers connected, the need for a standard/default and stronger wall was clear – This was called ‘The firewall’.   This term is an interesting one and comes from Vehicles where there is literally a fire proof barrier to stop the most precious contents – you – from being destroyed by the chaos of fire. This wall was a physically strong barrier of steel – ‘The firewall’.

As even more computers were connected there was more malevolence.  Some acts were by mischievous agents, while others were criminal in intent.  The firewalls therefore grew smarter, even became their own devices. Decoy devices grew – called ‘honey pot’s.  The rules stopping the harmful traffic were initially manually crafted. Then came the Adaptive rules came – These rules changed dynamically to cater for the increasingly sophisticated and varying attacks. The public had a new name for these increasingly common and infectious like vectors – ‘a virus’ or ‘worm’. The names were borrowed from the biologically damaging diseases and life-forms.

It is clear the battle of Order in your computer and Chaos will be on going.  The protection at a point in time lasts only until the malevolent forces find a way through or around the protection.  The firewall makers then find way to plug these new holes or techniques – and for a little while you are secure again.

Walls can be physical – wooden, stone, mortar and steel.  Rules can be walls and active software in computers.  Walls can be laws and conventions in society.   Commandments and sacred rules from religious texts, traditions and cultures are walls too.

Walls keep Chaos at bay – or at least manageable for the moment.

The only incorrect solutions would be
1. the impermeable wall – (For humans groups, no contact at all with others, for Computers – no connection to any other computer).
2. no barriers at all – Chaos. Think about it – all computer passwords, firewalls cleared – You can log into any ones computer or bank account. You can steal all their money and personal information. Unfortunately they can do the same to you. 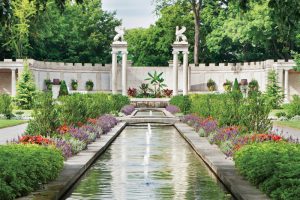 What can we learn from the computer experience of the last couple of decades?  In almost any environment, microscopic, to humans scale, initially innocent forces naturally fall into or becomes forces for order and chaos, good and evil. Walls were needed in the brand new computer field. Malevolence followed the new field – the malevolence is not in the wall, and turns out to be in nature – the chaos is in nature.

‘Walls’ in all their forms are important.  The barriers themselves are devices to protect, improve trust, security of the person and the information.

The bible describes walls of many forms. Understand those and seek their wisdom so you can keep your walls strong and your paradise intact. Protect yourself and family. Build trust for the benefit of all, but do so cautiously. The only incorrect – indeed foolish option – would be no walls at all.