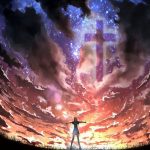 To your computer, you are a God. The computer’s raw data goes through buffering. It never sees the raw data from the world.

Are there parallels in how a computer sees you, its’ owner and creator? How we humans see our creator and God?

An interesting idea – so let us take a look. 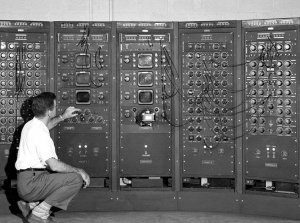 Electronics were created with circuits to help translate the real world input into something that was compatible for the computer. These circuits adjusted electrical voltage and the speeds of what ever data was coming in to something more suited to the computer. Sometimes the real world input was faster than these early computers could cope with. Other times the events were too quick and would be ‘missed’ by the computers. Sometimes that data was simply in a format not suitable for the computer – like the amount of light in a room, or the water level in a tank.

To assist with speed and translation issues – the data coming in was ‘pre-packaged’ so the main CPU didn’t have to work on the tedium of waiting for data to come in, could handle the volume of data coming in, or simply understand the data. The electronics – coils, relays, circuits – and integrated chips were called ‘interface boards‘, or just interfaces. The approach of modifying the data, pre-packaging and pre-processing it was called ‘buffering’.

Buffering in a more generic sense mapped the real world data into something the computer could use. 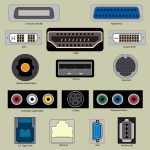 Your common desk top Windows, Mac or Linux computer these days has a myriad of inputs, with much circuitry handling many types and standards of data.
The microphone 3.5mm socket allows the capture of audio ways from microphones.
Universal Serial Bus (USB) is used to connect keyboards and capture key strokes and display ‘caps lock’ lights. USB is used to read/write vast quantities of data to external disks and other devices and computers. Ethernet ports connect network cables so the computers can inter connect. Many computers also now have on-board wireless network devices allowing the computers to connect to each other and also other wireless devices (like routers and gateways).

The modern computer never sees ‘raw data’ any more – it only sees the data that has been buffered and transformed into what it can understand directly.

You are in the Computer 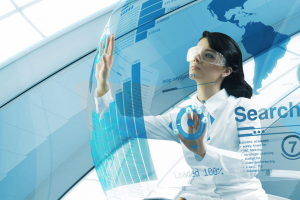 Now, pretend you are in a computer or perhaps a program(process) running in the computer.

Your whole world is in the computer. All your data, comes in from system calls. This is where you call a standard library in the computer to see if there is data for you, or ask if there is data for you. Each picture or sound comes in from some physical interface – network port, input/output port, USB port – all of it goes through some hardware and buffered and transformation in someway until it becomes visible and ‘ingestible’ – initially to the computer, and finally to you as the process/program running on the computer.

What does the process know of our outside world? It can’t see the humans – the world. All it sees is what comes in through its ports, what ends up as data. The best the process has is very indirect measurements of what is in the outside world.

If the process only believed in what was directly in its own domain – it would only know about bits, bytes, memory, interrupts, processor etc. It could do maths, store data, run a simulation to find optimal values for a complex function. It would not really know a flower or human.

As far as the process knows, those things don’t exist for real – at best it sees their representation as numbers.
Maybe getting some third hand data through one of its ports that suggest that – but it doesn’t know for sure.

This raw data and inputs the the computers external interfaces are not really seen or known by the process.
The process lives and is buffered from our ‘real’ world by its direct environment – bits, bytes, system calls. It does not even know for sure when the ‘human’ owning it puts it into hibernation mode. It might notice because the ‘system clock’ which it gets from one of its interfaces had jumped in time – but it doesn’t really know.

To the computer process running on your computer, you are God like. 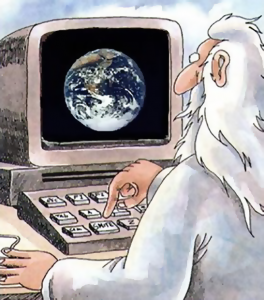 Your PC can’t see you, feel you. It only sees data coming from somewhere that represents you – the human. The computer does not know for sure. It does not know where in your house or condo you plugged in the USB port, or the network cable. Although it might have the raw data for a Photo (in say Jpeg format) – it doesn’t know where this data came from. It doesn’t know where the flower in the picture you took and loaded into it came from. Even if it had the GPS coordinate – what does that mean to the computer process? Its just numbers that only make sense in our world. You are a God to your computer.

What are you buffering?

It is a little like us today. For many, our buffer from the raw data is what we know and can prove in science. Our direct interface is our senses, our indirect ones are the scientific laws we have which seem to predict a whole lot. We rely on those laws to simplify our lives. Instead of us trying to understand the raw data we can see directly, we trust in the rules and knowledge that science has given us. We are using the hundreds of years of knowledge in science to help us interpret our world. I would go further and say that many are using science only – as a rule or by default – as the way in interpret and buffer our real world. For many, science *is* buffering what we ‘see’ –  that takes the load off us dealing with all that raw data – we don’t have to think.

While science has been enormously beneficial – look at the device and how you are reading this on,  the truly awesome technology that exists allowing you to read this is amazing – there is a big problem. There are gaps in the science.

How about the science of the gaps? 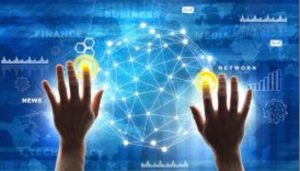 As our knowledge in science grew, the ‘gap’ were science could not explain a phenomena or the world shrunk. The gaps are definitely smaller.
However, there are still many areas where the science now is unproven – no firm theories, nothing testable, nothing proven by experiments, or even observation.

For example – for all the scientific marvel, the best minds in science have no idea how consciousness works, what it is, what it comes from.

In another area, scientists are unable to explain why it needed just the precise mass for a quark and other constants to have a big bang. A small change in any of these measured constants would doom the big bang theory. The big bang formula would not produce stars and worlds if you adjust any of the constants even a little. To avoid this and having to say ‘the big bang was caused by accidentally having just the right values for a quark mass’, some scientists proposed the multi-verse theory.

The multi-verse theory is that an infinite different set of universes that exist at the same time – in parallel.
Stephen Hawkings – one of the greatest minds of our time – believed the multi-versus theory.

It was his favourite – but equally he said it was impossible to prove.

Science is good at buffering – but it is not enough

What does this buffering mean? Why is it not good enough?

Perhaps there is a transcendent being, a creator that created our universe just that way?

Perhaps the creator selected carefully the values for the quark masses, the strength of gravity and all the other cosmological constants so we could ‘be’.

We cannot prove our creator exists – like the equally unprovable multi-verse theory.

Continuing our computer example – We humans know the ‘consciousness’ of the computer is delivered by the CPU, Motherboard and circuitry that was designed and assembled, electricity and a system clock that ‘ticks’. The computer program doesn’t have the right tools to be able to examine or ‘see’ itself – i.e. how we humans created and assembled it. 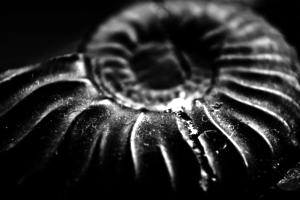 Let’s say our sentient computer program goes further and figures out that when it does maths using whole numbers less than 64,000 and divides and multiplies in twos it goes much faster than if it tries to do floating point calculations.

As the human designers of the computers, we know that this would be because the CPU has native commands that handle integer arithmetic and some of this can be done via shifting bits. Multiplying by two can be done easily by the CPU using a single assembly instruction that SHIFT the BITS in the register left or right by 1 place. Maths requiring floating point however, either need thousands of assembly instructions or the assistance of something like an external floating point chip or processor.

Thus the sentient program can see a substantial and measurable difference in its environment and world – but would not be able explain it directly.

Perhaps the computer could consider some explanations –

Option 1 – The computer was ‘made’ this way by something – its’ creator (us humans).
Option 2 – That there were multiple parallel universes where ome it was faster doing maths with floating points, and in others perhaps it was faster when working with multiples of 5 and so on.

The computer program could not prove either of these theories – but multi-verse option seems to be the more complicated option!

Historically up until the 15th century the human race was used to looking at the raw data from our senses and have some wonder and awe at the mysteries of our material existence. As the enlightenment period started in the 16th century, science was born and gave us enormous insights in to our world.

Science is buffering the raw data of our existence. We are not looking at the raw data any more – only what we’ve filtered through science.

However science is just that – something to help us understand. Science doesn’t tell us what is good and evil. It can’t explain our most basic question of where did we come from?

Your Universe – Where is God?

The truly deep mysteries are still there. Science is good, but absolutely not the complete answer.
Look a little into it, ask some questions. You may be in awe at what has been created. 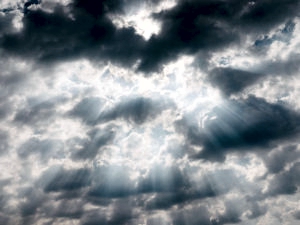 Can you get to Heaven from the Matrix?