Genesis 1:1 “In the beginning God created the heavens and earth.”

In the original Hebrew Elohim is plural. ie “In the beginning Gods created the universe.”
The Holy Spirit is in the very start of the Bible!

Now the big question is it: GIF or JIF? 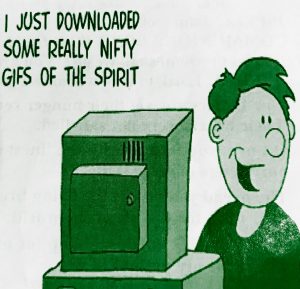 I’ve found the I learn more about the Catholic religion, the ethos and beliefs founded on Jesus’ life, teachings by learning about others views. In particular I’ve been reading and listening to the stories from those that have joined/converted to Catholicism.

One of the fundamental ideas in Christianity is the Triune – The belief that our one true God has 3 aspects or ‘persons’. It is a complex idea that I had a very rough grasp of, but am working to deepen my understanding of it.

I’ve recalled reciting the Nicene creed since I was in grade school – my guess would be grade 3 or 4. It begins:

“We believe in one God,
the Father, the Almighty,
Maker of all that is, seen and unseen.

We believe in one Lord, Jesus Christ,
the only Son of God,
eternally begotten of the Father,
God from God, Light from Light,
true God from true God,
begotten, not made, con-substantial
of one Being with the Father. “

This words are complex, but the idea they try to convey is deep. Reflecting now on it’s meaning as I learn more, shows it is deeper that I ever thought. Its almost fractal – the closer you look the more complicated it is – but at the highest level the basic idea is that our God is one, but in that one are 3 persons, aspects, perspectives, that are also God.

The name of the concept is triuine – over hundreds of years, it is the closet we have come so far to try to understand Gods nature. Many would agree that given God, is well – the God, our attempt to explain him would be guaranteed to be flawed, limited etc.

In a nut shell

These statements, as I best understand right now, are part of the Catholic belief:

– Jesus is son of God
– Jesus is God
– God has aspects – God the Father, the Son (Jesus), and the Holy Spirit
– God did not just ‘make’ a son at some Stage

There is much confusion and criticism of the Catholic ‘God’ around this.
Some say that the Catholic view is espousing multi-theism – multiple Gods. Some interpret the new testament as where the ‘3 faces of God’ was created and that in the old testament there was only one God. Therefore the New Testament invented Gods, or that the God of Old Testament is the true god.

The clues are in the Bible

Surprisingly, the hint of Triune is in the Old Testament, at the very start of the bible – the first verse in fact.

Genesis 1:1 In the beginning God created the heavens and earth (NIV)

Looking closely at the Hebrew word used “Elohim“, it is plural – meaning Gods.
It is translated to singular in English because the verse treats it as a singular noun.
The verse hints that God in some sense is singular and also plural.

“‘I am he; I am the first and the last. Indeed, my own hand established the earth…’ and now the Lord God and his Spirit have sent me.”

The Alpha and the Omegas says he was sent by the Lord God along with his spirit. 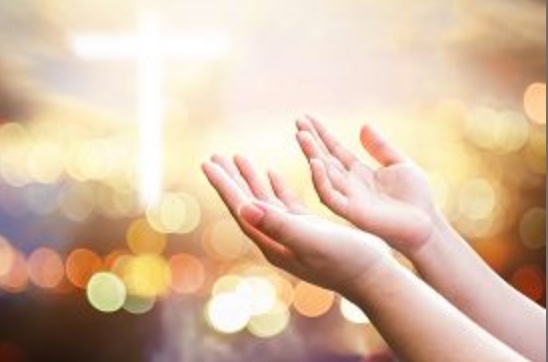 It struck me that some elements of the triune concept could be expressed in programming concepts like classes, instances, interfaces etc.

For example, using a syntax similar to many current programming languages, the concept of the Triune and God would be something like this:

Further, the ‘God’ class would be singleton – meaning even though it is a class, there would only ever be one instance of it.

Here is some more pseudo code:

So “god”, “jesus” and “hs” – all point to the same object – but represent different aspects (interfaces in programming terms).

With this pseudo code, the following would be true (The “is” is a programming operator used to ask if something is part of/descendend/supports something else):

jesus is God
hs is God
god is God

This pseudo code was sort of a “ah hah” moment – it helps me understand a tiny way how the Triune is about.

One other thing I would like to point out.  As Christians we believe we have been blessed with a divine spark – a part of God so to speak. ie Humans are made in image of God. We have divinity.

In programming pseudo code this perfectly is described like this:

We as humans are blessed to be part of/come from our creator.